Everything you need to know about P&O Cruises

P&O Cruises offer some great deals from the UK and our only experience so far has been a 2 night cruise on the Ventura Cruise Ship. We wanted to explore what else P&O Cruises have to offer so in this Guest Post, Anna from THECRUISEBLOGGER.com explains exactly that – Everything you need to know about P&O Cruises

I’ve had a fondness for P&O Cruises ships ever since my first cruise on the Canberra in 1995. As well as being a former P&O Cruises crew member, my dad has been a regular guest lecturer on board the fleet for 20 years, and my husband is a deputy captain for Carnival UK (Cunard and P&O Cruises). When Paul and Carole asked me to write about P&O Cruises for their blog, I thought I would put together an introduction to the cruise line for those unfamiliar with it. 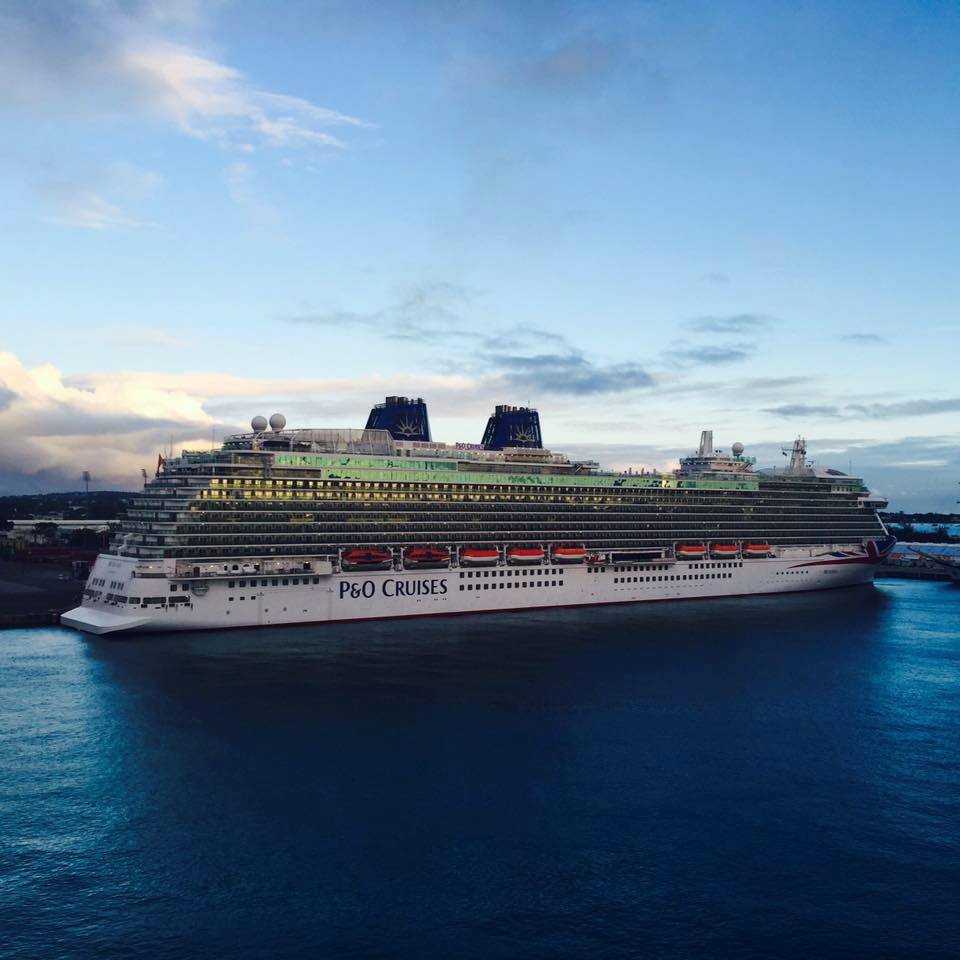 There are currently seven ships in the P&O Cruises fleet, with another two ships slated for future release (one in 2020 and another in 2022). The cruise line has ships to suit all tastes, from large family-friendly options to intimate adult-only. Arcadia, Oriana (and soon-to-be Aurora) are adult-only cruise ships, offering the most exotic itineraries (such as world cruises). In my experience these ships have a slightly older passenger base than the other ships in the fleet. 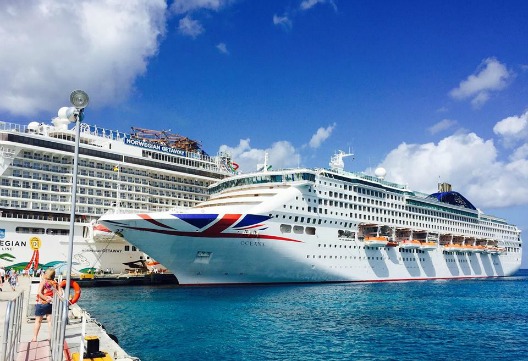 Azura, Britannia, Oceana and Ventura are all family-friendly, with lots of children’s facilities such as kids clubs, kids tea and paddling pools. The kids facilities are different to those on the likes of Royal Caribbean ships, so don’t expect to find water slides, carousels, flow riders or climbing walls. The family-friendly ships tend to cruise around the Mediterranean, Baltic or Norway in the summer and the Canary Islands or Caribbean in the winter months. Oceana is the only ship that will be based abroad for most of the year from 2019.

A British way of cruising with P&O Cruises

Cruising with P&O Cruises is a very British affair. When I have sailed with them, I would say 99% of the passengers have been from the UK. This percentage does change when ships embark on world cruises or are repositioned to the Mediterranean or Caribbean for a season. During our time on Oceana last year, there were a lot of Maltese passengers on board, as the ship had a weekly turnaround in Valletta. Similarly there were a lot of Australian passengers when I did Arcadia’s world cruise in 2011. I don’t recall ever meeting an American on any of the ships I have sailed on. 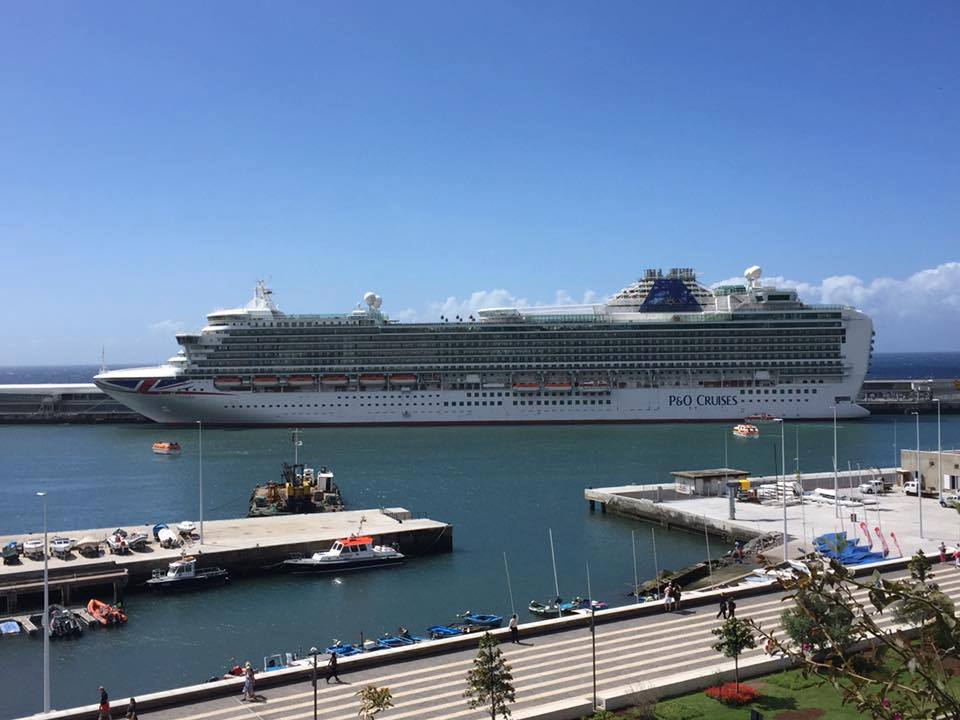 You will find elements of Britishness on each ship, from well-known foodstuffs such as Marmite and Costa Coffee to the ship’s Union Jack livery and the Great British Sailaway (which happens once a cruise). The cruise line’s also very good at offering British produce such as English wine and the delicious Winchester based Jude’s ice cream. Everything on board is priced in pound sterling, so there are no problems with exchange rates if you live in the UK. 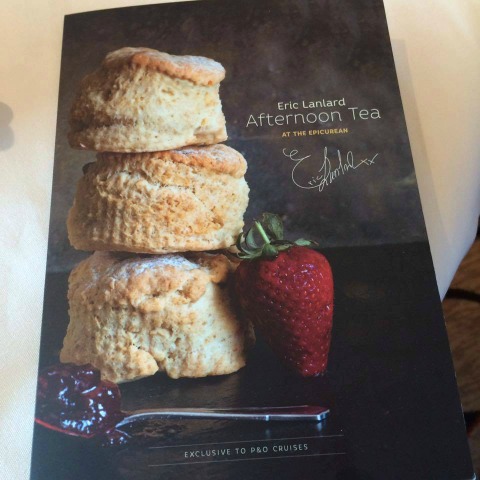 The food on board P&O Cruises ships caters to most tastes. Each evening the main menu offers a selection of meat, fish and vegetarian dishes, along with a special and a themed dish that could be anything from Asian to Italian cuisine. You can also choose a number of staple starter and main course dishes that are available every day. In addition to the main restaurant menu, each ship has a themed buffet every evening and there are a number of speciality restaurants that require a supplement. Chef Atul Kochhar’s signature Sindhu restaurant offers modern Indian cuisine. The Epicurean is the perfect place for 5 star fine dining that takes up the entire evening and the Glass House is great for a dinner in between cocktails and a show (no booking required). Wine expert Olly Smith has selected a number of delicious wines that can be paired with the food. Alternatively head to the Beach House for a steak on the stone, something of a phenomenon if you haven’t had one before! P&O Cruises have also just revamped their room service menu, which I’ve been lucky enough to sample. It’s really good! 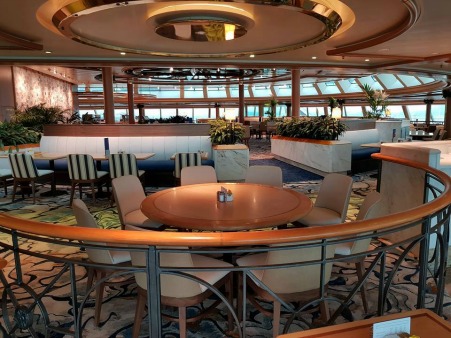 The Plaza on the Oceana

You won’t be short of bars whichever ship you’re on. From the traditional, refined Crow’s Nest on Aurora, Oriana and Britannia, to the trendy Metropolis and Planet Bar on Ventura and Azura, drinking venues are aplenty. The company have introduced a speciality gin menu along with craft beer (the majority of which are from the UK). I find the drinks on board very reasonably priced, particularly the cocktails. They are certainly no more expensive than in the British pub and the variety on offer is very good. Wine, coffee and soft drinks packages can be pre-purchased at a slightly discounted rate, but the drinks are by no means all-inclusive. 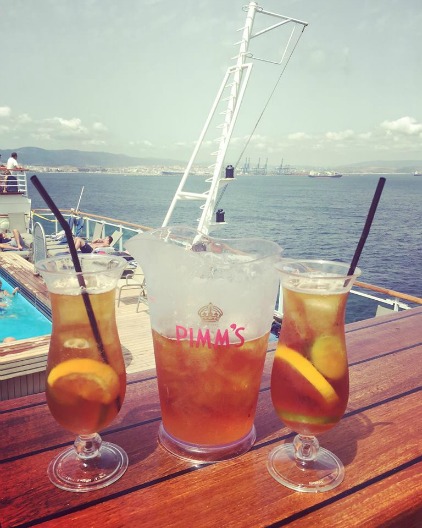 Cabin size does vary depending on the ship, but all cabins have tea and coffee making facilities, room service (many items have an additional charge), shower gel, TVs (sometimes interactive) showing British programmes and a make-up and turndown service. Most cabins should now have mini-bars as these have now been rolled out across the fleet. Bed configurations are single (single cabins), twin, double/king and pull down beds. All suites have butler service. Storage is normally very good in the cabins. Balcony size varies, and Oceana and Britannia are known to have slightly smaller balconies than some of the other ships. Azura and Ventura offer the most balcony space overall. 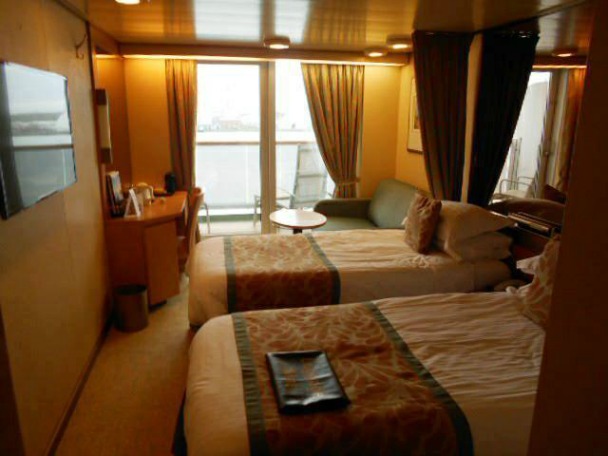 Cabin on the Arcadia

P&O Cruises do have a more formal dress code than some other cruise lines, so expect black tie evenings as well as smart casual dress (around 4 formal nights per 2 week cruise). Flip-flops, vests and shorts are banned in the main restaurants and bars in the evenings.

The Headliners Theatre Company perform shows every few days performing everything from Queen songs to West End classics. Most ships have two sittings of each performance in the main theatre. Aurora and Oriana have a separate cinema that shows films in the evening, providing a good alternative to the show. The ships also feature a lot of tribute acts and comedians in their entertainment schedule. The better guest speakers tend to come on board for longer itineraries, such as transatlantic crossings. Last year I saw Eddie the Eagle talk and Ann Widdecombe was also on board. 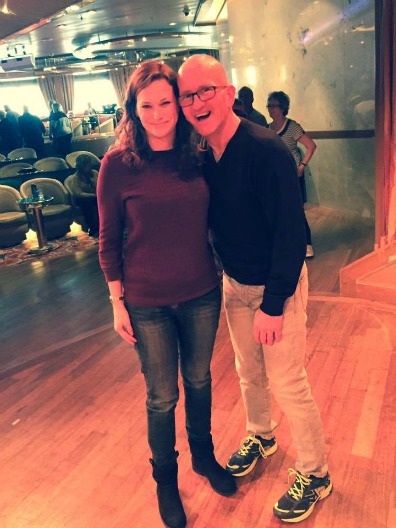 Anna and Eddie the Eagle

Gratuities are added on to your bill on board, although you can opt out of paying these at the beginning of the cruise. Gratuities are currently charged at £7 per day. Shore excursions, speciality restaurants and drinks are all additional charges. If you book directly through P&O Cruises, you often get very good on board credit, which is worth knowing in advance. You can use this once on board for most things, apart from future cruise down payments, currency, medical care, casino or cash back.

Anna is a thirty-something officer’s wife and former crew member who has sailed on 100 cruises since 1995. She originally set up her blog to chart her travels cruising full time with her husband on P&O Cruises ships. She now offers tried and tested advice on all cruise lines and she regularly features exclusive interviews with officers and passengers. The Cruise Blogger has been selected by Feedspot as a Top 50 Cruise Blog. You can find out more about P&O Cruises, along with ship reviews on The Cruise Blogger Website here, and do follow on social media here Twitter Facebook Instagram All photo credits to Anna Twitchin – The Cruise Blogger. 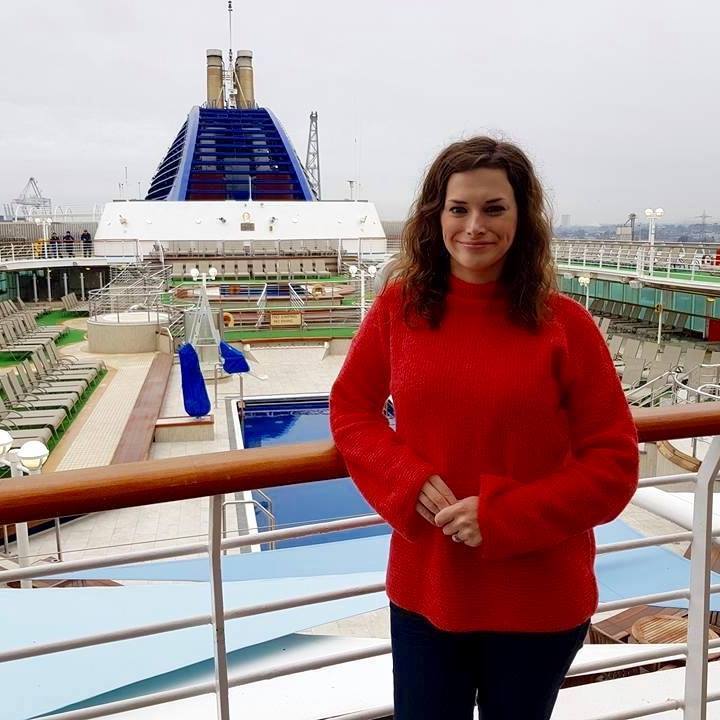 Anna on the Oceana

Check out our other cruising pages and posts here.

This post contains affiliate links, which means we may receive a commission if you click a link. While clicking these links won’t cost you any extra money, they will help us keep this site up and running.