We recently visited Rotterdam during a cruise on the P&O Oceana and was immediately struck on what a great city this is. Flights from the UK to the Hague, Rotterdams nearest airport, take less than an hour, its then just a 15 minute drive to the city centre, so it makes an ideal destination from the UK for a weekend city break.

So we have put this guide on Rotterdam so you can make the most of your stay in this fabulous city!

Most famous for its port, which is the largest port in Europe. Rotterdam is served by several rivers including the Rhine and the Nieuwe Mass. It is known as the gateway to Europe, it is 30 kilometres/ 18 miles from the north sea and has a population of just over a million.

How to get around Rotterdam

Rotterdam is well known for its diversity and that’s even true when it comes to transport. Options include water taxis, trams, water buses, taxis, metro and buses they’ve pretty much got it all. We used a water taxi when we visited, it was not only convenient and excellent value for money it was also extremely exhilarating, it should definitely be on your to do list when visiting.

Walk over the Erasmus Bridge

The Erasmusbrug is a uniquely designed bridge by Dutch architect Ben Van Berkal that combines cable and bascule (a section of the bridge can be raised to allow larger ships to pass under). It took 9 years to construct at a cost of 165 million euros, and was opened by Queen Beatrix of the Netherlands on september the 6th 1996. It’s just over 800 metres long and has four lanes of road traffic, two tram tracks, two cycle lanes and two foot paths. its unique style has earned it the nickname The Swan.

Built in 1960 it was designed by Hugh Maaskant to celebrate Floriade (an international exhibition and garden festival) which takes place every 10 years. It took 2 years to construct and at 186 metres, 610 feet is the tallest building in the Netherlands. The Euromast gives you the most spectacular views of the port and city and if the 101 metre tower is to low for your liking then hop onto the space tower which takes you a further 85 metres into the air. There is also a cafe restaurant on the first level, a sunset dinner is definitely on our to do list on our return. The views here are truly amazing. 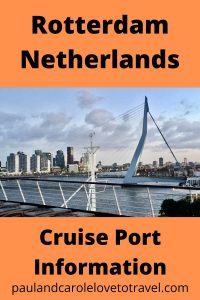 The Cube houses designed by Piet Blom are a set of houses that seem to defy both logic and gravity, they can only be found in two places Helmond and Rotterdam. Each house is built on a 45 degree angle and according to its designer represents a tree, there are 38 small houses all joined together and two larger ones called super cubes. The small houses have an inside space of 100 square metres but a quarter of this is unusable because of the inside angles of the house, maybe that’s where the saying a waste of space comes from? They cost around 300,000 euros to buy, but you can visit one for a mere 3.50 euros, you’ll be shaking your head in disbelief when you look inside one, but they really are a must see.

Spend time in the Markthal

Opened by Queen Maxima of the Netherlands in 2014, the Markthal houses 228 apartments, an underground supermarket and 1200 underground parking spaces. The apartments have been constructed into a huge arch leaving a covered space the size of a football pitch, which houses the Markthal food hall. With close to 100 stalls selling anything from fruit, veg, cheeses, cakes and bread, plus fast food from all around the globe. We tried some Japanese Ramen and some Turkish pide (pronounced pee-dae) both were delicious and reasonably priced.

There is so much choice, if you fancy something a bit more formal there is also a selection of bars and restaurants surrounding the food market. You will never leave this place hungry, but it’s not just about food there is also the stunning psychedelic artwork laser printed on to the 4000 tiles that cover the 11000 square metres of ceiling, it really is stunning.

Browse the many shops in Rotterdam

We are not avid shoppers but if you do love to shop you’ll find plenty of choice, from big high street brands to souvenir shops.

We absolutely loved Rotterdam, it really has got something for everyone, from the weird and wonderful architecture to the amazing port. The transport system is second to none and if you can’t find something you like to eat we would be amazed. In the two days we spent here we felt that we had barely scratched the surface, and can’t wait to return.

To complement this blog post we made a series of vlogs detailing our time on the P&O Oceana. The two vlog posts below gives you an insight in to the time we spent in Rotterdam.

Do follow us on social media here so we can take you along on our future events and travels!

This post does contain affiliate links, which means we may receive a commission if you click a link. While clicking these links won’t cost you any extra money, they will help us keep this site up and running